Who is God - Yin and Yang

Hello my friends, welcome to another edition of "Who Is Go " In the article we will cover some opinions of Yin and Yang from the "Christian point of view." Many people get Yin and Yang confused. It is not a symbol of energy and mass (you are mistaking Yin and Yang with the Theory of relativity). Energy and Mass are not two opposing forces. In most cases they are one just like Yin and Yang but Energy is not opposite to Mass. Some people believe that Yin and Yang represents only certain cases of opposing sides, like Male or Female, or up and down. The truth is that Yin and Yang represent all opposing sides Yin + Yang = Negative + Positive. The circle that they form together represents life and how we are all united through this circle of unity. Basically the concept of Yin and Yang implies that Good and Evil cannot exist without each other. That positive cannot exist without negative.
This is not the Christian view point (however it is good for Bible studies). Christians believe that Good can exist without Evil, but that Evil cannot exist without Good. If you never had anyone to teach you the difference between right and wrong you will think that everything you do is Good. This is called "Human Goodness" this Good is selfish good that does no good to anyone else besides themselves. A serial killer may not feel that he is wrong when he commits murder because in his own eye's he is doing a good thing but people ignore that fact and instead label him crazy. Dealing illegal drugs is wrong because illegal drugs hurt people, but the illegal drug dealers believe they are doing a good thing because they are able to take care of there families with the drug money. Not to mention that the one who buys the illegal drugs are not as severely  punished for there actions even though they are willingly buying the drugs and funding the illegal operations happening in there own community.  These are good examples of "human goodness."
The question is of course, would life have been better if none of these things had happened? Could life still function if none of these bad things happened? In the Christian point of view, Good can exist without Bad. There is nothing to define what is bad until it defies what is good. In the Christian belief everything started out good but because of "human choice" went negative and through chaos will come order. In other words Yin and Yang in the Christian view would not form a circle of unity, and that one day Yin will over power Yang because Yang did not exist until Yin was defied. Yin would equal "Divine Goodness"

Remember to check out the book "Master Science" its a book that shows you proof of God using facts about Science and History. The first section of the book is about creationism (intelligent design) and the second section is a mind blowing eye opening trip as we learn hardcore truth about God and history. You can get a copy of the book for only 99 cent from http://www.masterscience.webs.com you can also get a free copy of the first section which covers intelligent design. 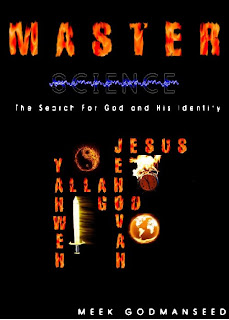 Email ThisBlogThis!Share to TwitterShare to FacebookShare to Pinterest
Labels: apologetic, apologetics, creationism, god and history, intelligent design, is god real, is there a god, proof of god, who is god, yin and yang